Each year, organizations across the country celebrate National Volunteer Week in April. Let us introduce you to some of the volunteers who come back to the Ranch week after week to help us keep it running smoothly. 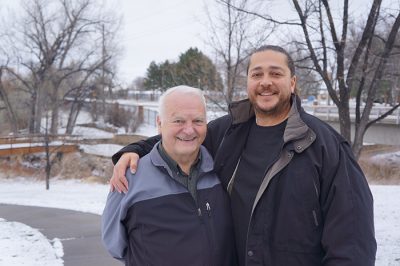 “I love coming here. Love it,” he said. “You kind of have to decide what’s important in life. Family is important. Doing something like this is important.”

Wayne has compiled data and statistics for YBGR for more than two years. He learned of the opportunity through his son, Tom Harsha, who is a mental health worker at the Ranch.

“I like to be able to make some contribution to help out,” Wayne said. “I can’t do what Tom does, but if I can take the time to help the Ranch with data to make better decisions, then I can give back.”

Wayne also likes to interact with Yellowstone’s youth whenever possible. Once, he brought flowers to the Ranch, and he, his wife, and Tom planted them with the kids.

“I’m doing it for the kids and so (Tom) can have a better chance to do what he does best,” Wayne said. “I would do it even if he wasn’t here, but it was a connection that brought us together.”

Wayne served as a pilot in the U.S. Air Force from 1968 until 1991. He has worked as a professor at Embry-Riddle Aeronautical University since 1988. He adopted four of his five children, including Tom. Having lived in Japan, Germany, and several states, he now lives with his wife in Columbus.

After raising six kids and now two grand-puppies, you might think sorting clothes would sound dreadful. But Malinda Rickman, a new volunteer to YBGR, spends an evening each week in our clothing room doing just that—sorting clothes.

“After having so many kids, I don’t mind laundry,” she said. “I enjoy the feeling of accomplishment when I can see some of the progress and helping somebody that needs it”.

Malinda previously worked in clothing retail, so sorting the clothing room seemed like an easy way for her to get involved in the community.

“It’s nice to be able to branch out and give back,” she said. “The people I’ve met are just wonderful. I just really enjoy it.”

Malinda has always lived in Billings and owns the Continental Gate Company with her husband. An avid runner, she doesn’t mind running across town to work in the clothing room. With all of her sorting, she said she is at a point where she is starting to “make it pretty.”

Longtime YBGR volunteer Gail Norman has a heart for kids and the people who help them.

“I like what the Ranch does and I feel like maybe I’m contributing a little to that,” she said.

When asked how long she has volunteered at the Ranch campus, she joked, “I was afraid you were going to ask me that.” For about seven years, she has filed for the Fiscal Department and has helped with setting up filing systems. When she has time, she now helps with other clerical tasks and fills in at the reception desk.

“[The staff are] always very appreciative I’m there,” she said. “Everyone is very, very happy to see me. It makes you feel good.”

Gail is usually only able to volunteer at the Ranch with short notice since she also works regularly as a substitute teacher at the Billings Career Center. In her spare time, she also enjoys reading sometimes several novels a week, caring for her acre large yard she jokingly calls “the plantation”, staying healthy, and spending time with her two grown sons and six grand kids.

Anyone who walks into the Garfield Center on a Tuesday has a high chance of running into volunteer Dorothy Jensen. There, she helps with filing, data entry, and as she called it, “odds and ends that help out the staff.” In May, she will be celebrating her third year as a volunteer of YBGR.

“It gives me something to look forward to,” she said. “(The staff) are very welcoming, pleasant, and friendly.”

Dorothy was a registered nurse before she retired. She had enjoyed volunteering in her hometown in Iowa. In 2013, she moved to Billings to be closer to one of her two sons, and she caught the volunteer bug again. She quickly discovered the volunteer opportunity at YBGR through Adult Resource Alliance Center of Yellowstone County. She said she is thankful for the experience because she enjoys being out and meeting new people at YBGR.

“Even though it might seem like a minor thing, it takes a load off of their jobs,” she said. “They’re always really grateful for everything”.

Dorothy enjoys visiting her granddaughter, who is also a nurse. She also appreciates cross stitching, reading, meeting with a weekly quilting group, and volunteering at Adult Resource Alliance.

“I’ve been aware of the Ranch ever since I was in high school,” she said. “I had never really been on campus. Now that I’ve seen how big it is, it’s very impressive. I wasn’t aware of how far-reaching this is and what they do.”

Judy volunteers weekly at Yellowstone by filling in at the administration building reception desk and helping with paperwork. She started in this role in April.

“Somebody got my name and called me and said, ‘Hey, you like to volunteer.’”

Judy is on the Laurel City/County Planning Board, serves as the chairperson for the Laurel Urban Renewal Agency, works as secretary/treasurer of the Laurel Revitalization League, and delivers meals for the Laurel Meals on Wheels program. She said her most significant passion is conducting genealogy research at the Laurel Library. But volunteerism, in general, fuels her.

“It really gives me a reason to get up in the morning to know that I have something to do to keep me busy and make me feel good.”

Having previously worked in the insurance industry, Judy also owned an auto repair shop in Laurel. She retired in 2014.