The kids squirmed in their seats wondering what was in those three containers. Troy Paisley of Zoo Montana opened up the first container and pulled out a terrarium. Its contents—a Madagascar Hissing Cockroach!

The kids rustled in their seats; some stood up and groaned, “Ew,” or “Cool!”

As Troy stood at the front of the Chapel, he explained that animals have tools and adaptations which help them survive in their environments. He held the bug in his hands and explained how cockroaches hiss like a snake when they feel threatened. He explained that without cockroaches, we might not have vanilla or chocolate ice cream… That’s right! This particular species of cockroach originates from the same forests where vanilla and cocoa beans were first found. Without the forest cleaning and maintenance work that cockroaches provide, these beans might not grow! 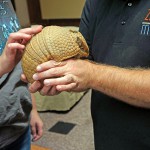 With the cockroach safely put away, Troy unlatched the next container and introduced Bambi, the Three Banded Armadillo.

“Aw,” said some of the girls. Eyes bulging, their hands sprung up. “Can I touch it?”

Watching the armadillo wiggle, the kids were dazzled. Troy explained that this armadillo is different from other species because of the unique tri-banded armor on its back. This trait gives the armadillo the ability to flex and wiggle— just as it was doing. He brought the Armadillo around for the kids to see. They giggled at its hairy tummy.

After watching Bambi explore the floor for food, she was returned to her traveling crate.

The kids knew there were three animals, so what was next? Troy stretched his gloved hand into the covered enclosure and pulled out Gabel, the Great Horned Owl.

The kids’ eyes glowed as they admired the large bird. In awe, they watched as he stretched out his wings.

The kids learned that Gabel is named after Gabel Road in Billings, where he was hit by a car. His injuries resulted in an amputation of his right wing. Troy explained that because of this, he could not be returned to the wild and landed a permanent home at ZooMontana. He also clarified that owls cannot turn their heads all the way around, but that they do have twice the amount of vertebrae in their necks as humans. This allows them to turn their heads a great deal further than us.

At the end of the presentation, the kids were excited when Troy offered them to properly pet the back of the armadillo, while of course, sanitizing their hands after. Lined up, the kids walked up one by one to pet it.

Some of the girls couldn’t decide whether their favorite animal was Gabel or Bambi, but it’s certain that they had a hoot!